how can you help a child and his/her rejected parent?

• Listen to the child, without negating what the child is saying, regardless of how outlandish it may be (that is the child's reality) and then encourage the child to hear the rejected parent's point of view. Appeal to the child's maturity by saying that is the way mature people handle conflicts.

• Appeal to the child's intellect by encouraging him/her to carefully consider ideas or statements that are blatantly false or outlandish.

• Look for books or movies that can stimulate discussion about the importance of two parents and the sadness of having only one parent.

• Look for opportunities to provide positive input about the targeted parent.

Children who are exposed to PAS suffer in a variety of general as well as specific ways from this experience. It will often have both temporary and lasting effects on their lives. This is obviously not the intention of the alienator, but it is the result of such alienation procedures and programming which causes the child to show a negative attitude and behavior towards one of the parents.

SIGNS OF ALIENATION IN PARENTS

Below are the more common symptoms of parental alienation. Many of these behaviors will look familiar, because some alienation occurs in all divorces. Some symptoms may come as a surprise, because many don't think of the behavior as something that can hurt children. Common symptoms include:

WHY WOULD THE CHILD BELIEVE THE ALIENATING PARENT?

• The child feels the need to protect a parent who is depressed, anxious, or needy.

• The child wants to avoid the anger or rejection of the alienating parent.

ALIENATED CHILDREN MAY GROW UP TO BECOME ADULTS WHO

• Have trouble trusting others.

• Engage in substance abuse to relieve the pain of parental alienation.

• Are more likely to experience divorce.

• Are more likely to have difficulty with authority and the law.

• Experience the loss of their own children through parental alienation ​

CLICK ON THE FOLLOWING LINKS TO LEARN MORE ABOUT:

How to identify Alienation

you are not alone 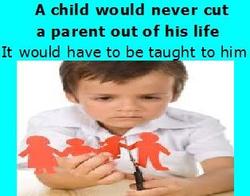 Now follows a series of symptoms found in children, when they are presented over a period of time, with brain washing or programming against another parent. The effects are both short and long term. It must be stated from the beginning that not all the symptoms about to be mentioned occur in all children who are involved in the parental alienation syndrome scenario. There will also be some difference between the very young child and the older child who have more experience of the PAS process. Not all the symptoms mentioned occur in all children. However some symptoms undoubtedly will occur and effect the child unless some form of treatment is carried out which eliminates the impact of the alienating process:

SPECIFIC PROBLEMS OF CHILDREN SUFFERING FROM THE EFFECTS OF PARENTAL ALIENATION SYNDROME:

Children displaying these tendencies may well be the subjects of parental alienation by one parent. If this is the case, attorneys and judges need to know how to help stop it, as well as deter and prevent further alienation.

SIGNS OF ALIENATION IN CHILDREN

If your ex is actively or passively alienating your child(ren)’s normal affection toward you, he or she was probably emotionally abusive while you were together. Parental alienation is her or his way of continuing to abuse and hurt you via remote access. Generally, most bullies don’t see themselves as such. If you confront your ex about this behavior, they’ll deny it and blame you for your deteriorating relationship with your child(ren), even as you make every effort to be a present and involved parent.

Parental Alienation is damaging to children, whether or not they reject a parent. It's important to recognize and stop the harmful behaviors of the adults before any 'symptoms' develop in the child, and before the behavior escalates to Parental Abduction or Parental Homicide

Parental Alienation Syndrome was defined by Richard Gardner as ‘a disturbance in which children are preoccupied with deprecation and criticism of a parent-denigration that is unjustified and/or exaggerated.'

Parental alienation, or Hostile Aggressive Parenting, can be mild and temporary or extreme and ongoing. Most researchers believe that any alienation of a child against a parent is harmful to the child's emotional and mental health. Extreme, obsessive, and ongoing Parental Alienation can cause terrible psychological damage to children extending well into adulthood.

Parental alienation, sometimes called Hostile Aggressive Parenting, is a behavior by a parent, or an adult a child trusts, such as a grandmother/father, aunt, uncle, etc., whether conscious or unconscious, that could create alienation in the relationship between a child and a parent.

Parental alienation can be considered a form of emotional abuse for at least two reasons. First, the strategies that the alienating parents used to effectuate the alienation are emotionally abusive in and of themselves. That is, the alienating parents verbally assaulted, isolated, corrupted, rejected, terrorized, ignored, and over-pressured the children in order to alienate them from the targeted parent. These behaviors are part and parcel of what constitutes emotional abuse of children. In addition, it is proposed that separation of a child from a parent also constitutes emotional abuse. 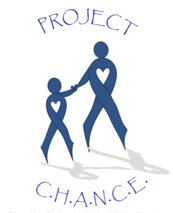 LEARN THE SIGNS | SPEAK UP |  REPORT ABUSE
View on Mobile